Our annual and year-round events include activities for LGBTQ+ and Ally friends and families. Events include dances, parties, comedic performances and an exciting, colorful and dynamic parade that has been twice marshaled by the Governor of Pennsylvania and three times by a US Congressman. The Pride Parade is the cornerstone event of PrideFest held in New Hope each May.

With an estimated 15,000 in attendance and projected retail sales revenue of over $1.9 million, New Hope Celebrates, Inc. is locally and nationally recognized.

National news broadcasts have featured New Hope Celebrates, Inc. on the LOGO channel — Philadelphia’s Comcast TV News. There have been hundreds of print, and digital articles published about New Hope Celebrates over our 17 years, from small publications in Sheboygan to the New York Times.

Word AIDS Day Observance
Each year on December 1st we celebrate WAD with an Annual Candle Light Vigil and remembrance in partnership with FACT Bucks County and St. Phillips Epical church. 2016 FACT featured portions of the AIDS Quilt, on loan from the Names Project a reading of names and guest speakers shared their personal stories.

OUT in October & The Annual High Heel Drag Race
Since 2015 NHC has played host to The High Heal Drag Race on West mechanic St. this annual fundraising event is a fall favorite attended by 1,000 + visitors and locals. Additional a verity of small events throughout town to celebrate and promote the fall season.

Quarterly Cocktail Socials
Meet and greets are open to individuals and businesses for a chance to mix and mingle. Hosted at different local venues, guest speakers, and NHC updates and announcements.

Guest Bartender Fundraising Events
Hosted by various establishments. Volunteers from the community get a chance to be Bartender for the night. Funds are raised through tips and donations.

2019 we hosted the 2019 Annual NERP Conference (Northeast Regional Pride) from March 7 through March 10. Every year a city is chosen to host the conference for their region and New Hope, PA. was chosen for the second time since 2013.

2017 we were invited as guest speakers on (Show Name) at I Heart Radio. Where we were asked to talk about what makes New Hope so special.

2017 we welcomed our new 100 x 25-foot, eight color Equality Fag. Which will serve as an ambassador for New Hope, Pa. to various locations nationwide during Pride Events. It will also be available to other organizations who wish to display it or use for LGBT educational proposes.

2016 our LGBT History Exhibit was embraced by thousands of visitors and locals. With a visit from by Senator Bob Cassy – who led a special LGBT community round table discussion and acknowledged our achievements.

2015 we purchased our very own 50-foot, eight color Equality Fag which we proudly display during our annual Pride Festival.

2015 the town of New Hope was named among the “Top Ten LGBT Small-Town USA Destinations” by the venerated online Huffington Post.

2014 we were also recognized as BEST Suburban Pride by the readers of the Philadelphia Gay News.

2013 we hosted NERP – New Hope was honored to be the host city for NERP’s (North East Regional Prides) conference on March 8-10.

2012 we were awarded the “Most Outstanding Multi-Event in Bucks County” by Landmark Towns.

2009 the founder of NHC – Daniel Brooks was honored by the Commonwealth of Pennsylvania as an “Outstanding Citizen” for work on behalf of NHC in keeping New Hope’s LGBT population within the mindfulness of others.

2008 we hosted Pennsylvania Governor Ed Rendell who walked in the May 17th NHC Pride Parade and then spoke to citizens of that community from the porch of Havana Restaurant. 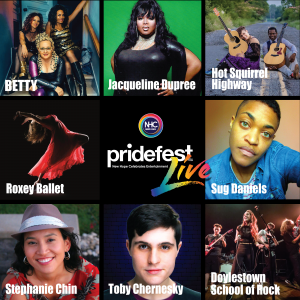