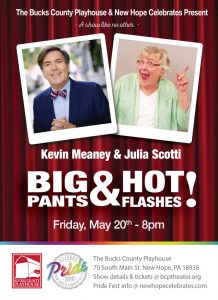 Friday, May 20 at Bucks County
Playhouse

New Hope, Pa. – What happens
when two successful comedians make life altering decisions to come out as
gay and transgendered? Bucks County Playhouse and New Hope Celebrates are proud
to present renowned LGBT comedians Kevin Meaney and Julia Scotti in their
comedy show “Big Pants and Hot Flashes” at Bucks County Playhouse on May 20 at
8pm. Their collaboration is a hilarious once in a nighttime experience
wayyyyyyyyy over the rainbow! A no holds barred Q&A will follow
the show. Tickets are also available for a VIP reception before the show
with the comedians for an additional $25.

Few comedians
can skip back and forth across the sexual and gender lines like these two
veteran professionals.

Kevin Meaney is familiar to audiences from his appearances on “The
Tonight Show with Jay Leno,” “The Tonight Show with Johnny Carson,” “30 Rock,” “Night
Out” and “Gotham Comedy Live.” He was on Broadway in “Hairspray” for over five
years.

Julia Scotti is a nationally headlining comedian who performs in comedy
clubs, theaters and colleges. She was one of the winners of the Laughlin Comedy
Festival, was a Finalist Ladies of Laughter and was named Advocate Magazine’s
“Top 5 Hottest Transgendered Comedians of 2013.”

Tickets
are $25-$55, and the VIP pre-show experience is an additional $25. “Big Pants
and Hot Flashes” is sponsored by New Amsterdam and Stoli. For full details, and
to purchase tickets, please visit buckscountyplayhouse.org, call 215-862-2121,
or visit the box office at 70 South Main Street, New Hope, PA.

There will be a great line-up of entertainment during the entire week.
The Raven, New Hope, Pa., will have dance parties with special DJs, piano
sing-a-longs, an art exhibit featuring The Queens of New Hope and a performance
by CeCe Peniston in the Rrazz Room. They will also host Sunday brunch on May 22
followed by the poolside T-dance. Havana will sponsor the annual “Official
Pride Women’s Party” on Sunday, May 22.

Recently featured as one of the four LGBT events to
enjoy this spring on HuffPost Queer Voices and Fagabond.com, the highlight of
the week is the Pride Parade and Fair on Sat. May 21. The parade will begin in
Lambertville, NJ at 11:30AM; crossing over the bridge into New Hope, Pa. There
will be floats and marching bands including the Big Apple Corps and the DC
Drummers. This is the only nationally recognized Pride Parade that crosses a
state line.  There will also be a Pride
Fair Saturday afternoon, offering goods, services and food.  On the outside stage will be performances by
the Josh Zuckerman Band, The Doylestown School of Rock, Christine Havrilla
& the Gypsy Fuzz, Christine Martucci and The Band of Love.

New Hope Celebrates (NHC) is a nonprofit
organization focused on highlighting the history and cultural nuances of New
Hope, PA while stimulating the retail, hospitality, and professional community.
NHC is comprised of a Board that drives activities and events that serve the
diverse LGBT populace through the creation and promotion of marketing
opportunities, educational activities, and cultural events. One such event is
the annual, week long PRIDE celebration held in May.  Since 2003, NHC has organized events that
recognize the strong LGBT presence in New Hope and celebrated the history and
culture of our scenic river town. Funding generated through New Hope Celebrates
events is channeled back into our community to support our neighbors in
collaborative business and cultural initiatives that make New Hope a great
place for residents and visitors alike.

Located between Philadelphia and
New York, Bucks County Playhouse opened in 1939 in a converted
1790 gristmill after a group of community activists, led by Broadway
orchestrator Don Walker and playwright Moss Hart, rallied to save the building.
The Playhouse quickly became one of the country’s most famous regional
theaters, featuring a roster of American theatrical royalty including
Helen Hayes, Kitty Carlisle, George S. Kaufman, Grace Kelly, Robert Redford,
Bert Lahr, Walter Matthau, Angela Lansbury, Bernadette Peters, Alan Alda, Tyne
Daly, Liza Minnelli and Audra McDonald and remained in continuous operation
until December 2010. In 2012, the Playhouse
re-opened thanks to the efforts of the Bridge Street Foundation, the nonprofit
family foundation of Kevin and Sherri Daugherty, and Broadway producer Jed
Bernstein.

Since its renovation, significant
productions include Terrence McNally’s “Mothers and Sons” starring Tyne Daly,
which moved to Broadway and was nominated for two Tony Awards, and “Misery” by
William Goldman based on the Stephen King novel which also went on to a  Broadway run in the 2015-16 season. Two of
the Playhouse’s recent productions – “Company” starring Justin Guarini, and
William Finn’s “The 25th Annual Putnam County Spelling Bee” – were
named by Wall Street Journal to its “Best of Theatre” list for 2015. 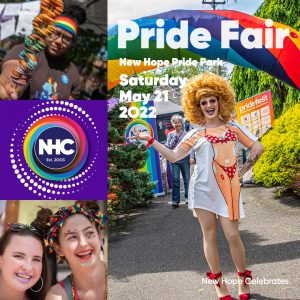