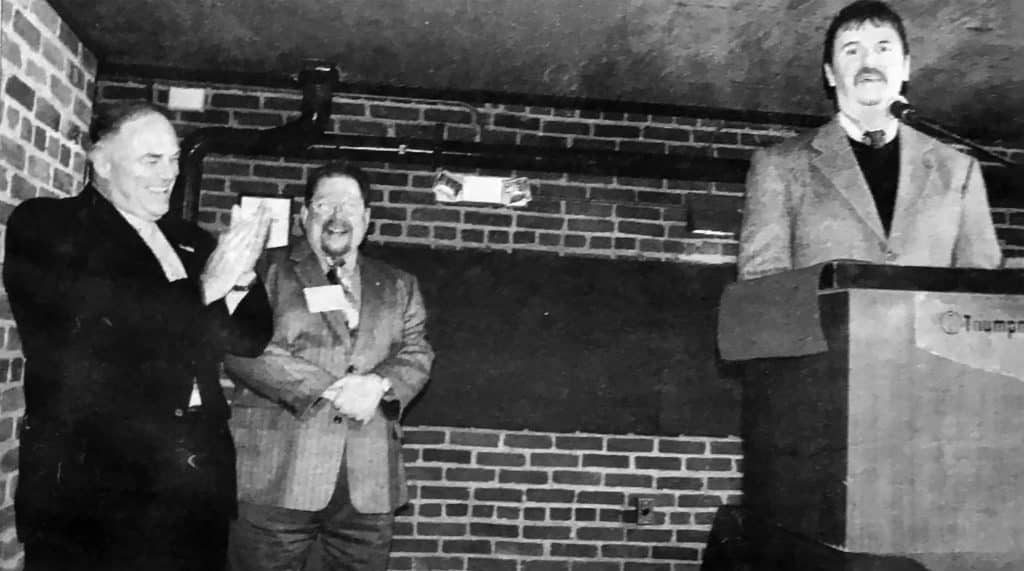 From our scrapbook, we look back at New Hope Celebrates History.
And now, the pot of gold from the New Hope Gazette, October 28th, 2004. Article by Joe D’ Aquila, Assistant Editor

Photo by Gordon Neiburg. Dan Brooks, right, one of the festivals lead organizers, introduces Governor Ed Rendell, left, Sunday at Triumph Brewing Company, s Brad Kirsch, the Democratic candidate running in the 29th District, looks on. Rendell used the occasion to stump for Kerry and discussed his advocacy of gay rights. “Victories are incremental. But we’ree making progress.” he said.

Participation in New Hope’s first gay pride festival was strong across the board, according to an event organizer.

The first-ever “Somewhere Over the Rainbow” gay pride festival wrapped up on Sunday, and co-organizer Dan Brooks said the event was a success on many different levels.

The weekend’s stated purpose was to re-introduce the larger gay, lesbian, bisexual and transgendered communities to New Hope and vice versa while delivering the added bonus of giving a boost to local businesses while also supporting charitable causes.

Proceeds from the festival are to benefit the Bucks County chapter of FACT (Fighting AIDS Continuously Together) and the Human Rights Campaign, an advocacy group working for gay rights.

The festival included a mixed bag of events, and Brooks said there was support across the board for the full slate of offerings.

“Every single one of the events was very well attended”, he said. “Everyone had a great time”.

Particularly successful, Brooks said were the entertainment venues, due apparently to the high quality of performers brought in for the weekend, according to Brooks.

“The entertainment was superb”, he said.

Brooks said that even more subdued activities like the walking and bus tours were well attended and received, showing the event wasn’t just about partying.

The final day of the festivities included an “InfoMart”, with informational and retail booths set up around Triumph Brewing Company in Union Square, and was kicked off with a visit from Governor Ed Rendell.

Brooks said he had hoped the bulk of the festival would stay nonpolitical, but if there were a forum for political expression, the InfoMart and Rendell’s appearance would be the place.

Rendell, who was introduced by Brooks, welcomed festival-goers from inside Triumph and urged them to vote.

“Governor Rendell has brought the government to reality”, Brooks said in his introduction. “He’s brought it to the level of the average Joe, or in the case of gay men, Joseph. And for all the Josephinas out there too.”

A blushing Rendell then took the podium, a bit taken back, but able to joke his way through.

“I think I have been introduced about 10,000 times in my career…and that was quite an introduction, “ he said.

Rendell spoke of his efforts to extend gay rights in the state and the uphill battle he sometimes has to fight with a disagreeable state legislature.

And even with a full slate of campaign appearances scheduled, including one the next day in Philadelphia with John Kerry and Bill Clinton, Rendell said the impetus for making a change had shifted from the politicians to the voters themselves at this late date in the campaign.

“The election really isn’t in our hands anymore, it’s in your hands, “he said. “It’s a question of how bad do you want it?”

The Governor implored those listening to not just vote but to get other people to the polls and to help volunteer efforts on Election Day.

Rendell said he didn’t want to see Pennsylvania end up as this election’s Florida and stated how severely he felt toward the current administration and what he sees as an attack on the possibility for fighting gay rights and for domestic policies in general.

“And it’s not even George Bush, “he said. “I think George Bush is a pawn of people who have a far more sinister agenda.”

Rendell didn’t mince words with how important he felt the coming election was but felt there was also an opportunity to make changes within the state if Kerry voters chose state leaders along party lines.

“This is a desperate fight for the heart and soul of this country, “he said. “This is it. This is our last best chance. Give this crew four more years and there may be no turning back.”

But Rendell ended on a positive note and continually pressed for increased participation.

“It’s going to be a new America,” he said. “I really and truly believe that.”

After the event, Brooks said he felt Rendell delivered an effective speech and appreciated his calls to increased political activity.”

“I think Rendell is a very personable leader, which is what I think a politician is supposed to be”, he said.

For the rest of the day’s activities at the InfoMart, Brooks said things could have been better, with a lower than hoped for turnout due to an overcast day and what Brooks saw as insufficient awareness of Union Square in general.

But Brooks said the vendors were all supportive and enthusiastic about making suggestions.

Out in New Hope News

A video message from the NHC President

Would You Gave A BUCK? Challenge

Our 2019 Annual Review is now available to everyone online.